Like other college softball and baseball coaches around the country, I’m at home sitting on my couch instead of standing with my team in a dugout. My heart goes out to the players around the country who are being asked to make a big sacrifice. The Class of 2020 and their teammates will always be remembered for the hardships they endured after losing their seasons. How will the sacrifices they make today impact their personal stories in the future?

History tells us all of this will surely pass. Before we know it, players around the world will once again be hanging their backpacks on the fence behind the dugout. They will enthusiastically take the field in ballparks filled with adoring fans. But, before this happens, players and coaches are now being asked to make big sacrifices to place service to country above their strong desire for normalcy.

The stories about healthcare workers on the front lines fighting this invisible enemy are inspiring. The daily sacrifices they are making is a great model for all Americans.

It’s heartening to hear the stories about players and coaches who are responding positively to this crisis. They are serving others and attempting to change the narrative through positive and fun virtual team activities. Unfortunately, I have also seen examples of the bitterness that is understandable, but not healthy or productive.

Ballplayers making sacrifices is not new in the history of our country.  At the beginning of World War I, the 1918 Major League Baseball season was shortened due to America’s involvement. Then in December of 1940, President Franklin Roosevelt mandated that every male between the ages of 21 and 36 register for twelve months of service. Baseball players were not immune to this urgent call to serve the country in World War II.

Stars like Ted Williams, Joe DiMaggio, and Bob Feller were summoned into service at the peak of their playing careers. With the freedom of the country on the line, they responded to the call. I’m sure each had their doubts whether they would ever play the game they loved again. 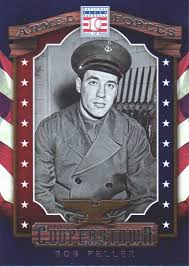 Hall of Famer Hank Greenberg, the American League’s Most Valuable Player in 1940, was also drafted to serve in 1941. One of his famous quotes before entering the service should encourage softball and baseball players who lost their seasons. He said, “If there’s any last message to be given to the public, let it be that I’m going to be a good soldier.” The thousands of players not competing this spring should be proud to be considered “good soldiers”.

Women also served many critical roles during World War II, including on the baseball diamond. In an attempt to save the game of professional baseball, the All American Girls Professional Baseball League (AAGPBL) was formed in 1943. The popular movie, “A League of Their Own”, illustrated how women bridged the gap before MLB players returned from the war. They played a fun and entertaining brand of baseball that fed the souls of fans around the country.

Thanks to college players at all levels for their courage and sacrifice. This sentiment may ring hollow for some seniors in the Class of 2020 who will never play an organized ballgame ever again. However, years from now, it may turn out to be the most meaningful and compelling chapter in their life stories.

The Power of a Story

I teach college and corporate Customer Relationship Management classes. We discuss the importance of formulating and effectively communicating a story about ourselves and our accomplishments. A unique story separates us from those who we will compete with for jobs, promotions, and even coveted relationships.

College players who lost their seasons have a clear choice. Develop and communicate a positive story or default to a negative narrative. Here are two vastly different versions of future stories to consider. Which one will you choose?

I was a victim. All my hard work went down the drain when our season was cancelled. I will never recover the precious time with my teammates and coaches that was stolen from me. I lost important statistics and recognition that would have defined my college success. This hole in my college career still negatively affects me today.

My college career didn’t turn out the way I envisioned. I was deeply disappointed when the 2020 season was cancelled suddenly, because I worked hard to be the best player possible. When I look back on this challenging experience, I’m reminded of several positive lessons that still impact my life today.

I learned how to channel my disappointment into positive energy.  This mindset has propelled me in new directions that have been exhilarating and rewarding.

I now cherish my time with people who are closest to me. My coaches always stressed coveting every moment with my teammates. I now realize what they were trying to teach me. I try to share this wisdom as often as I can to help others understand the importance of not taking our relationships for granted.

I always enjoyed being part of a team, but by living through that difficult period, I learned the real importance of unity as communities and countries came together to battle a common enemy. It became obvious to me that even the smallest acts of kindness, service, and sacrifice can make a big impact in the lives of others.

The discipline required for the rigorous training and preparation each season taught me habits I still use today. I use many of the same techniques and strategies to tackle big projects in my professional life. This discipline has also been invaluable with the personal challenges I have faced since my playing days.

Most importantly, I’m thankful for the opportunity to play the game I still love today. Not everyone who played the game as a kid had the skills and desire to play in college. Because of the game, I met the teammates I “grew up” with. I learned from the coaches who cared deeply about my development as a player and a person. I experienced the need for discipline from the umpires who enforced the important rules of the game. Finally, our fans touched me with their unconditional love and support.

My shortened playing career turned out to be more of a blessing than a black mark on my life.

These two alternative stories are just examples. Every player will write a different story with a different ending. I challenge you to think about the most positive and productive way to respond to this current period of personal hardship and sacrifice. This crisis can be a blessing in disguise. Our busy worlds don’t often afford us the time to reflect on our personal mission.

I remind my students and corporate audiences that when someone tells a positive story about you…YOU WIN! Conversely, if your story is negative, people tend to communicate that narrative with even more veracity. It’s never too early to begin developing a story that is positive, compelling, and one you will be proud to tell.

My hope is everyone reading this will use this time to look for new ways to grow, serve, and inspire. Your story could end up resonating for generations to come.

In addition to writing this hitting blog, Paul is a college softball hitting coach and the author of the book Hitting With Torque: For Baseball And Softball Hitters. He also provides unique customer engagement training through his company Torque Consulting. Paul teaches a Customer Relationship Management class to undergraduates at Wheaton College (IL) and MBA candidates at Loyola University Chicago and the Benedictine University Asia Program.

A New Ballgame For Athletic Recruiting